Mills, however, was closed down in 1956, leaving the credit union without a home but full of members who desired to keep it alive. Lawrence and Ann, determined to find a home for their credit union, approached the Reverend Joseph Kohler of St. Francis Catholic Church about an affiliation to become a Catholic credit union. As the parishioners of St. Francis had been asking to form a credit union for their parish, the Weber’s timing could not have been better! Fr. Kohler agreed and received approval, allowing the credit union to open its doors under a new name on April 7, 1957 as East Traverse Catholic Federal Credit Union (ETCFCU).

By 1960, ETCFCU was becoming better known throughout the community. Membership was growing and by 1963, plans were completed for a new office building on Cass Street in Traverse City. As the credit union moved to the new location in 1964, business continued to grow and contributed to reaching a milestone of $1 million in assets in 1965. The Webers continued to give of themselves and believed firmly in the philosophy of putting members first. As they claimed, “Determination and hard work are the key to success in any credit union … each member must be treated as an individual, not as an account number.”

With the 1970s came new technologies, including online data processing, which enabled the credit union to serve its members even better than before. By 1979, membership had grown to 3,800 and assets totaled over $5,000,000. A goal was set by the dedicated staff of ETCFCU to become the largest parish credit union in the area! It seemed that with their growing numbers, they were set to do just that. Also in late 1979, Lawrence Weber made the decision to retire as manager of the Credit Union, handing the title over to Leonard Classens.

In 1986, ETCFCU had grown out of its offices and moved again to its present home on Veterans Drive. Here, it continued to grow steadily and reached its 40th anniversary in 1990.  The next expansion took place in October of 1994, when ETCFCU merged with the members of Leelanau Catholic Credit Union. With the addition of accounts from Lake Leelanau, the assets of ETCFCU had then reached $22,882,775, with 6,456 members and a staff of 20 employees.

ETCFCU then saw many technological advances for the credit union. Among them was a contract with a new online data processor, which enabled members to access their accounts at other select credit unions who used the same system, “Shared Branching.” Shared Branching was and is, an arrangement providing ETCFCU members even more locations to access their accounts! Through Shared Branching, ETCFCU was also able to open a shared office with TBA Credit Union from 1998 to 2009. This endeavor was a first for the area and only the second of its kind in the state! 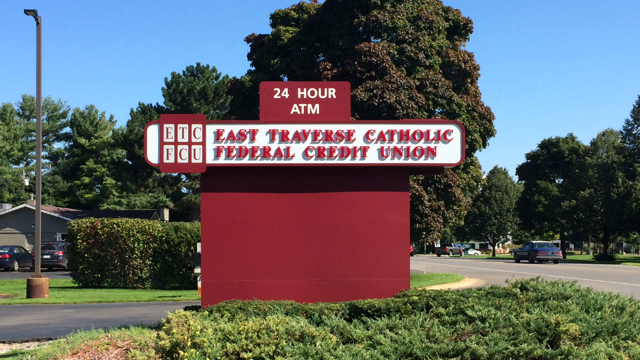 In 2010, ETCFCU celebrated 60 years of serving its members, the parishioners of numerous Catholic parishes in Grand Traverse and Leelanau Counties, a membership of 7,290. A few years later, in December of 2014, CEO Leonard Classens retired after 40 years of service to the Credit Union and handed over the leadership reigns to Gregory Gurka.

As the credit union industry continued to grow, competition became more challenging as well. In September of 2015, at $50 million in assets, ETCFCU’s management and Board of Directors felt that serving only Catholic members in the area placed restrictions on the future growth of the Credit Union. To ensure a healthy future for the Credit Union, ETCFCU decided to open the membership charter to accept any persons who live, work, worship or attend school in and businesses and other legal entities located in Antrim, Benzie, Charlevoix, Grand Traverse, Kalkaska or Leelanau Counties, Michigan; and also included are spouses of persons who died while within the field of membership of this credit union, employees of this credit union, volunteers 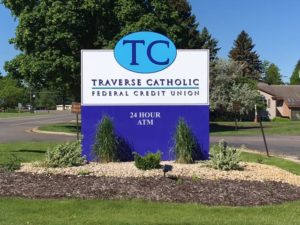 in the community, members of their immediate families, and organizations of such persons. As demand rose for service on the east side of town, the then current name of “East Traverse Catholic Federal Credit Union,” had potential to cause locational confusion, so the Credit Union went under a name change omitting the “East.” With the modified Credit Union name, it also made sense to give the logo an update at the same time. At the end of 2017, a third location was opened in the East Bay area, assets were just shy of reaching $62 million, and Gurka transferred the CEO position into the hands of prior board member, Patrick Brady.

In October of 2020, Brady stepped down from his three year commitment as CEO and provided the reins to long-time employee Patty McManus. Mr. Brady stayed on as CFO until December of 2021.

Traverse Catholic Federal Credit Union (TCFCU) will continue to serve its members with the same Catholic culture of caring, compassionate service, with God at its core. The only difference in expanding the charter is that TCFCU will no longer turn any one person away based solely on his or her religion, and the future growth of the Credit Union will no longer be restricted.

TCFCU looks forward to what lies ahead for its members as it continues a tradition of dedicated service to its family of members.

Thank you for your interest in Traverse Catholic Federal Credit Union!

We appreciate your loyalty and trust and pledge our devotion and service to you.

If you are using a screen reader or other auxiliary aid and are having problems using this website, please CLICK FOR FURTHER ADA WEBSITE ACCESSIBILITY RESOURCES or call (231) 946-6655 for assistance.